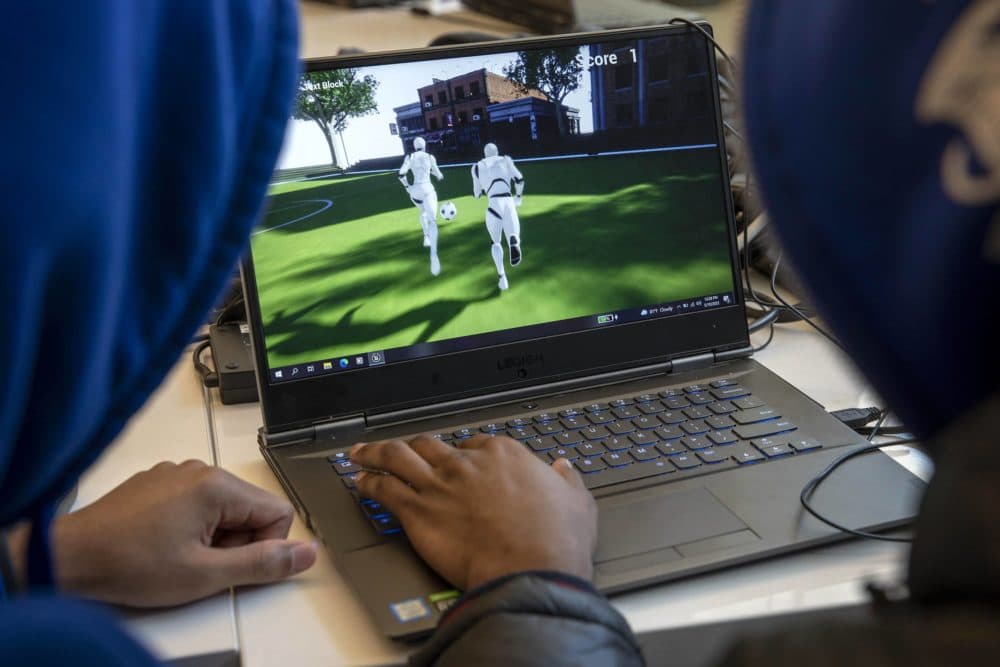 Re-engaging students in school after an extended period of distance learning has been an uphill battle for many teachers this year. Dearborn STEM Academy staff knew this struggle well.

“When we entered the pandemic, we were so, just, in our own world,” said English teacher Greg Nelson.

Learning to be in a classroom again was a difficult adjustment, especially during the first few weeks of the school year. But Nelson says a new video game design project that drew on multiple areas changed things in unexpected ways for him and many of his students. It was – you could say – a game changer.

During a recent visit to the school, JR Murillo, 17, and Edson Miranda, 16, were eager to demonstrate a game they designed and produced this year.

The game opens with a short animation: a student has overslept, causing her and a friend to miss their bus for a trip. They try to catch up by car, but end up crashing on the side of a very dark road in a heavily wooded area.

The two friends part in the chaos and the player’s goal is to reunite the pair.

Miranda, who invented the script, said the premise of the game was quite simple.

“You mostly try to find your way through the forest,” he said.

Miranda and Murillo said they were proud of the finished product. And they enjoy watching other people play a game they helped create.

“It was very exciting to see people’s passion for the result of our hard work,” Murillo said.

The students added that this in-school unit was fun, making it easy to learn the skills needed to build the game – which is exactly what the teachers at Dearborn STEM Academy were hoping for.

He added that the students learn more than computer science with this project. Teachers integrated the unit into four different subjects, from art to English.

“Your game can only be as strong as the story it’s built on,” said Nelson, an English teacher.

There is also a civic component. Social studies teacher Melissa Mongogna-Tiffney helped her students recognize the cultural biases inherent in many commercial video games today. She challenged her students to think of ways to diversify the characters audiences see in games.

The video game design program was created shortly before the Covid-19 pandemic for computer science students at the school. But its implementation was halted when school buildings across the state closed in 2020. All group work was difficult to do when school was remote.

When class schedules returned to normal this year, the video game project made a comeback. This has helped engage students far beyond what teachers expected in this first year of returning remote learning.

“There was a feeling that you were still part of something,” LoPorto said.

He thinks the students increased their engagement, in part because of the personal connections they made in their project groups – and a reliance on collaboration. For example, an absent party member could mean a missing element in the game structure.

“They need you,” LoPorto said. “What if you don’t show up and they’re looking for an asset to put in the game?”

Teachers at the school say the video game project also helped restore a sense of community among instructors, as it required them to coordinate lessons with each other. Nelson said that, like his students, he learns how teamwork can make any endeavor easier.

“We all come back [to our roles] next year,” he said. “That’s not the case across the district, but this team depends on each other.”